An “Œdipe” that does justice to Enescu

Destiny is implacable, but, at the same time, it is immaterial; it can be perceived only as a narration. On the other hand, a story, the more captivating it is, might lose on the way precisely this implacable, because of the details. A concrete representation of the implacable is the time that runs, without anyone and anything being able to stop it (only speed can put it in perspective). As such, the solution chosen by Valentina Carrasco for representing fate is the sand, starting from its use in a sandglass that measures the time running.

Enescu’s opera, the most important lyrical creation of a Romanian composer, is an act of courage: that of representing the terrible myth of Œdipe, “character of gigantic dimensions, who made other people back down” (André Tubeuf). The enormous length of time the composition required (15 years), the theatrical difficulty (there are many characters, so the need for many good voices), the very complex and modern music, the Romanian premiere that took place very late (22 years after the one in Paris) and, finally, the communism, with all its ideological complications gave birth to all sorts of debates around this opera, which tried to overturn the significations of the ancient myth. For the national complexes of inferiority, it was hard to accept that the main character is an incestuous parricide, so they always looked for other meanings hidden in the libretto about Œdipe’s lack of guilt, while at the same time they forgot that a myth cannot be disputed, but it must be taken as it is, axiomatically.

In fact, Œdipe is a toy in the fate’s hands, and his destiny is programmed by the gods. Valentina Carrasco says it metaphorically: Œdipe is the sand in the sandglass and he cannot escape until he takes his burden all the way out. And we believe that, with the new production of Bucharest National Opera, we should give up using as motto of this opera the following lines from the libretto: I have defeated destiny, I have defeated gods. 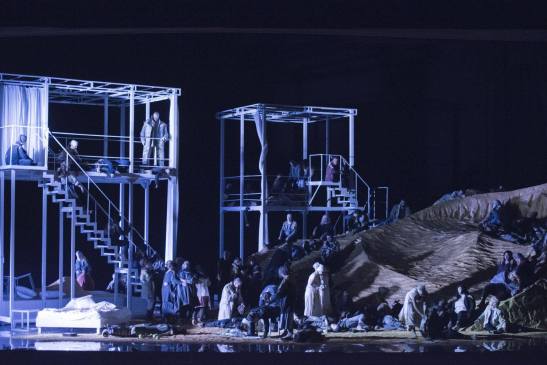 The scenography created by Blanca Añon placed multi-functionality in the centre of the action. Three scaffolds covered in white sheets, that allowed ingenious projections of the shadows inside, represented Laïos’ palace. At the same time, the scaffolds allowed the vertical use of the plan, so the sets did not seem exaggerated compared to the human size. The passage from the idyllical first act to tragedy takes place through a ballet, which is here used as a pantomime decomposed in the episodes to take place later, placed in the audience, then in a box, and then on stage: the murder of Laïos, the killing of the Sphinx, the marriage of Œdipe and Jocaste, the self-mutilation. Sand is a symbol of the destiny: at first, it’s seeping, as a bad omen, then it simply floods the whole Theba, like a disease (like pest, in the reality presented by the libretto), and it becomes a beach of the refugees in the last act, a haven. Because Oedipus at Colonus is not far from the drama of Syrian refugees we are witnessing these days. And Thésée is an idealised image of the media, that can bring the refugees’ drama to public attention. A very inspired brainwave, starting from Edmond Fleg’s libretto: Vous tendiez les mains vers ma juste couronne, et l’on ne voyait pas la main que je vous donne? (You were holding out your hand to my crown, and you didn’t see the hand I was holding out to you?).

World Press Photo of the Year 2013: 26 February 2013, Djibouti City, Djibouti African migrants on the shore of Djibouti city at night, raising their phones in an attempt to capture an inexpensive signal from neighbouring Somalia—a tenuous link to relatives abroad. Djibouti is a common stop-off point for migrants in transit from such countries as Somalia, Ethiopia and Eritrea, seeking a better life in Europe and the Middle East © John Stanmeyer, USA, VII for National Geographic

The costumes created by Barbara del Piano are atemporal and they suggest a Theban society that becomes autoritary and militaristic once Laïos abandons his child, when the city is under curfew because of the pest (associated with the desert taking over the city) or when Créon takes power. For once, and in obvious contrast with the old production, the video images created by Esterina Zarrillo were comprehensible and, even though a little too many, they suggested the erotism of the sleeping Sphinx, or of Œdipe’s incest, moreover, they added value to the sets of the last act, with the waves. But maybe the most spectacular element of this production was Peter van Praet’s lighting design, which was not just perfect, but also imaginative, as it coloured  absolutely everything, deep down to the psychological levels, in mostly golden tones, of sunset, as if the time was running more slowly, but also in violent flashes, that stressed the drama. The scene of the Sphinx gave us back the feminine dimension of the monster (don’t forget that, in French, in the libretto, the word is feminine, La Sphinge, almost impossible to be translated into Romanian – Sfinxa).

In conclusion, the new production succeeds precisely where other directors encountered difficulties: tragedy is omnipresent, but it’s wisely balanced, an element that rises problems, because Enescu’s opera is so statical that, at a certain moment, it was staged as a kind of oratorio (by Nicolas Joel). 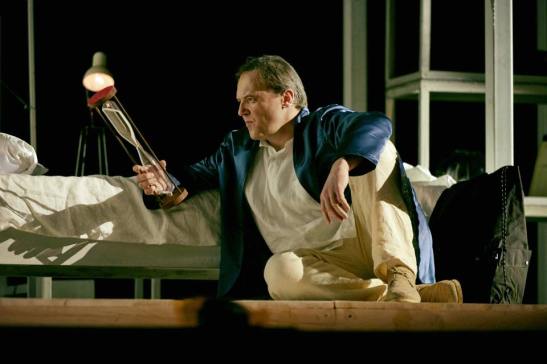 Davide Damiani returned as Œdipe, after having made an excellent impression during Enescu Festival. This time, he sang the part differently, in a virile manner from the beginning to the end, and he managed to seize not only the tragical dimension of the character, but also his human sides. A solid voice of classical baritone, that avoided Verdian accents, and gave subtle and balanced colours to the dark parts (almost an antithesis of David Ohanesian), by almost always choosing light instead of shadows. Horia Sandu was a more introvert, but very convincing Tirésias, and he left the forefront to the other bass, Marius Boloș, who was a really imposing and even aristocratic High Priest. On the whole, the entire cast was very good, but I start thinking that, maybe, we should take the solution from the Wiener Staatsoper,  where they use the same  mezzo both for Jocaste and the Sphinx. While Sidonia Nica was touching and feminine, it seems that nothing can persuade the person playing the Sphinx to sing in a white voice. Sorana Negrea gave a good start to Je t’atendais…, but, after a few bars, she introduced useless coloratura and ruined one of the most intense musical moments of the opera. What a pity, as the solution chosen by the director was very ingenuous: a woman covered in very long hair, coming out of a stone, and simply fascinating Œdipe. Liviu Indricău returned as the Shepherd, and seemed to get our attention more than his part would ask for (in a way, it is what happens with the Idiot in Boris Godunov, an opera that seems to have inspired the ceremony in the first act of this Œdipe, where Laïos’ subjects bring offerings when his son is born). Lucian Corchiș, Florin Simionca, Mihnea Lamatic, Vicenţiu Ţăranu and Dan Indricău were very comfortable in their roles (Laïos, Phorbas, the Watcher, Tésée, Créon), and they proved experience and self-assurance. The debutants Ala Cheptini and Antoaneta Bucur passed well the premiere’s exam, even though some might have preferred a more sensitive, more engaging Antigone.

The chorus conducted by  Stelian Olariu was, as always, very homogenous and paid attention to the tempi required by Adrian Morar, who, unlike Leo Hussain a few weeks ago, preferred a more contrasting dynamics, to the prejudice of nuances and musicality. The result was, for instance, that the scene of blinding loses its drama because of lack of intensity. The orchestra was rather direct and forgot the round sound they had during the Festival.

An Œdipe that must be seen not only by the experienced people, who know Enescu’s music. It is a staging that opens the way to understanding for every person who wants to discover this opera. One more performance in December, don’t miss it. 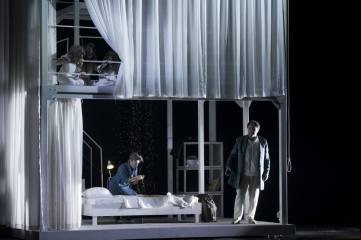 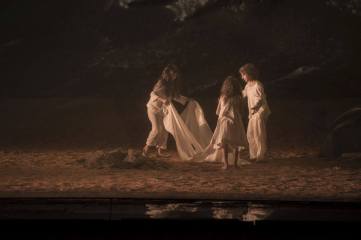 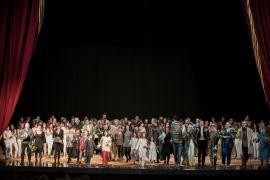 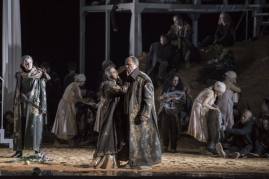