A new season at La Scala opened on December 7th, as required by the tradition. The opera chosen for one of the most important cultural events of Italy was Giovanna d’Arco, a rarity. We think right away of Renata Tebaldi and her sensational recording from 1951, in Milano, too, but in the RAI studios: it was a recording that propelled her, when only 29 years of age, as one of the best sopranos in the world. But this opera, belonging to Verdi’s galley years, could not approach La Scala for more than 150 years. And suddenly, everything has a special symbolism. Because, after the premiere in 1845, followed by other 16 performances, Giuseppe Verdi broke up with the Milanese theatre for no less than 36 years. Thus, the return of the Maid of Orléans at Teatro alla Scala in 2015 acquires the dimension of reconciliation over time, as moving as the reconciliation between Fiesco (Verdi’s musical self-portrait) and Simon Boccanegra…

But the premiere yesterday triggered one more reconciliation: the one between the Italian conservative audience and the modern opera directing. The main thing nostalgics reproach modern directing is that it distorts the composer’s intentions. It is a sophism, because they seem to forget the librettist. In this case, Temistocle Solera imagined a script that comes very close to the absurd, with many moments that are so far from historical reality that it puzzles us. The French director Patrice Caurier said he was so astonished at the liberties Solera took, that he had to read Schiller’s play carefully (the play that inspired the libretto), looking for the significations of some dialogues, but also for the explanation of this mystification. And how could one not gape when we find out that Jeanne d’Arc and the king Charles VII were in love, that the heroine was sold to the English by her own father, who thought she was possessed by demons? And that she does not die burnt at the stake, but she is saved by the same father, seized by remorse and revelations, and her death comes in a last battle for her king. Still, when accompanied to the grave, she resurrects and goes to heaven. How can one present such a thing on a stage today without being ridiculous?

Moshe Leiser and Patrice Caurier sent Solera’s delirium into a dream and separated the reality and the phantasy into two different plans. As such, Giovanna’s bedroom remains as a framework, a background for the grand history, like in an oneiric projection. Therefore, the accent is put on the father-daughter relation, and exorcisation turns into psychotherapy. Caught between the two worlds, King Charles becomes a golden statue, idealised, not far from the signification of a Prince Charming. Verdi wanted a grand opera, inspired by history, but the absence of secondary characters and the rarity of ensembles inevitably create an intimist story among Giovanna, Giacomo and Carlo. The staging at La Scala solved it gracefully, by the above-mentioned separation, in two plans, between grandeur and intimacy.

As often on the opening night in Milan, accidents happened: the baritone Carlos Álvarez caught a flu and Giacomo’s part was sung by a quasi-anonymous Devid Cecconi, who proved to be a revelation. His looks were no advantage, and the score of the prologue and of the first two acts made him sound brutal. But the last act is a miracle: the music practically starts to anticipate the idea of verdian baritone. The high tessitura, the deeply touching paternalism of the relation father-daughter showed a completely different baritone. Cecconi proved, for several minutes in a row, that he knew so well this universe that Verdi later populated with Giorgio Germont, Rigoletto or Simon… A baritone epiphany.

Anna Netrebko’s singing was solid and full of vitality. But it lacked characterization, and the entire interpretation was based on her artistic instinct and on a timbre of exceptional quality, that made her famous all around the world. She was everything else but a young maiden of 18, seized by mystical exaltations and by foolish heroism. She was a Walkiria in velvet armour, but not the Maid of Orléans.

Francesco Meli is the tenor that Italy introduces as the continuator of the great tenor tradition in the country that invented opera. It is no little thing, the burden of history is enormous. He sang paying great attention to the style, he was impeccable both in diction and in phrasing, but he avoided the super-acute notes in V’ha dunque un loco simile.

With this premiere, Riccardo Chailly took possession of his musical kingdom: it is an opera that he knows very well, ever since 2008, in Bologna, from where we have a video recording (staging by Werner Herzog and Henning von Gierke). If the Milanese audience did not love Daniel Barenboim very much, Chailly proved eloquence in the Italian idiom ever since the playing of an electrifying national anthem, and continued as the pretender to the glory of a Muti or an Abbado. He was highly crafty in the vocal coordination of the chorus, which plays a very important part in this opera and which received the most applause at the end of this memorable evening.

The video broadcast is available on TV Arte: Giovanna d’Arco. 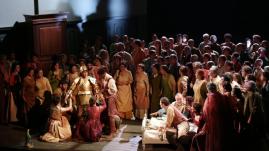 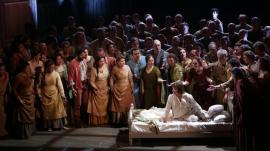 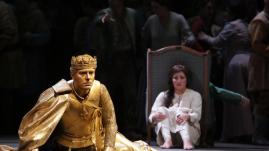 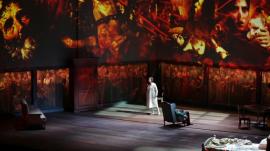