My neighbour is a soprano, Mrs Duvernoy told me so…

Between a cultural event of national interest (La Sylphide, with Alina Cojocaru) and a musical event that excites the melo-maniacs all around the world, I chose to be a cosmopolite and I went to the cinema, to see La traviata, which opened the new season of Teatro alla Scala. I have no regrets, and I hope the ballet performance at the National Opera was extraordinary.

From my point of view, the most waited for names on this evening list were Dmitri Cerniakov and Daniele Gatti. And not because Diana Damrau is not a good soprano. She is very good, but, when we talk about Violetta Valéry, she will never be Callas or Angela Gheorghiu. But, from the musical perspective, in La traviata the soprano is everything. Cerniakov’s debut at La Scala seems logical to me. The Russian director is very original, exactly because he does not use the western modern directing clichés. The psychology stops far away from the psychoanalysis, he just lets Freud and Jung be. Nevertheless, the scenographies he invents are full of east European bovarisms.

On the whole, the perspective on Verdi’s masterpiece which, in Italy, and mainly in Milano, stopped being just an opera and, since Lucchino Visconti (1955), has become a mass, was this year not just an iconoclastic one, but it had a realism pushed to the limits of discomfort. First of all, the romanticism was eliminated from the stage. All the high enthusiasms, all the phrases with „important meanings” were reduced, calmed down, or even stripped of their big significations. An example, the dialogue where Alfredo suspects that Violetta returned to her former lover, the old and rich baron Douphol: Dunque l’ami? / Ebben, l’amo. Here, all the big tragic sopranos stress dramatically that l’amo, with a glimpse of self-sacrifice, with that accent that left no opera lover indifferent when listening to Callas, Zeani, Cotrubaș or Gheorghiu. Damrau was asked to sing these words with no emphasis at all, and on purpose: for a long time, there has been nothing new to add in the field of melodrama. The XIXth century Parisian mondaine world is brought up to date, in the XXIst century, as a world resembling more the fauna in Dorobanti, Bucharest. The boorishness, even in an extreme emotional context – the scene of the ball in Flora Bervoix’s house, acquires another dimension, where violence is extremely familiar, and Papa Germont slaps his son violently in the face, in order to make him get back to his senses. 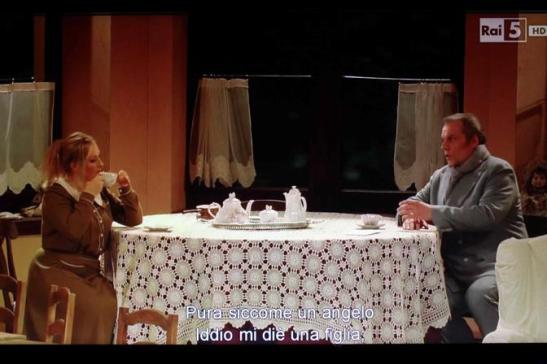 Cerniakov’s sacrilege starts right on the altar of Verdi’s drama: the relation between parents and children. Right where the duo between Giorgio Germont and Violetta Valéry was built on a revelation – that of discovering an extraordinary character in the behaviour of an „escort” -, tonight the dialogue takes place in a kitchen, where each of the two protagonists consumes his/her own drama, but with a distance between them. A kitchen in a cliché house, the ideal house of the east European who moved from the communist block of flats to his own house. A big kitchen, with modern windows and imitation of wood, with a view to a forest. If Visconti brought in 1955 on the stage of the Milanese theatre pieces of furniture inherited from his aristocratic family, Cerniakov places on the round table in the kitchen the enormous handmade napkin knitted by his grandmother. Di provenza…, that follows this scene, is not at all the epiphany of a father that discovers his son, like we were learned in tens of years of opera representations. Alfredo simply ignores his father, he lets him grumble, and makes Giorgio Germont seem irremediably expired. And the attempt the son makes in order to find a personal balance has nothing to do with his father, but it is more a physical search, as he grabs around the objects in the same kitchen, continues the preparation of dough (a symbol, from the beginning of act II, of his idyll with Violetta), or nervously chops some vegetables. I have to admit I could not repress a malicious smile: after Piotr Beczala’s interview, where he vituperated against Regietheater, tonight he seemed very comfortable, artistically speaking, in that kitchen, typical for the immigrant strawberry pickers (even for the city born ones), who build a beautiful house in the country that they left…

Not to mention the hugely kitsch doll dressed as Violetta in her glorious and decadent days in Paris. Here it is worth mentioning a few quotes from La dame aux camélias.

„She had once been a kept woman, and had tried to go on the stage, had failed, and, relying on her acquaintance with fashionable people in Paris, had gone into business and taken a milliner’s shop. […]Prudence Duvernoy (that was the milliner’s auspicious name) was one of those fat women of forty with whom one requires very little diplomacy to make them understand what one wants to know, especially when what one wants to know is as simple as what I had to ask of her.”

Add to this description a short hair dyed in violent red and you will have the image of Annina in Cerniakov’s vision. In fact, Annina does not exist anymore, she is simply replaced by Prudence Duvernoy from Alexandre Dumas-son’s novel, an old procuress who „matches„ Armand Duval/Alfredo Germont and Marguerite Gautier/Violetta Valéry, and then, in the novel, goes to have sex with Gaston. Placed instead of the chambermaid, this Prudence/Annina is a mirror. She reflects an image of Violetta several years later – death saved her from such a destiny. Somehow, this is the place where tragedy is hiding, in this haunting of Prudence, who is Violetta’s alter-ego. One more reason for you not to hurry and judge the director. He did his homework and he did it very well. And a surprise – in this part we saw Mara Zampieri, a famous soprano of the ’90s.

Diana Damrau is not a diva, and more than this, I think she has never intended to be one. She is a great soprano, who does her job honestly and at a very good vocal level. She honourably got over the ordeals of the first act, and showed her vocal splendour especially in the last act, where she was credible but also convincing, and this is, after all, what matters. Piotr Beczala was at his best, very comfortable in this part, even though some high notes in the second act were a little forced. On the whole, he seemed the most at ease on stage in Cerniakov’s vision. As for Željko Lučić, he was exemplary, with a very rich voice, and a grave centre, well posed and solid. His detractors just make a big mistake. The chorus sounded a bit loose at some moments. By the way, we must notice the absence of the ballet – no matter how beautiful the music is (well kept by Cerniakov and Gatti), any kind of choreography would have seemed out of place in this staging. Daniele Gatti fed the performance with some slow tempi, close to decomposition, but also with a lot of science. From several points of view, this production reminded me of the minimalism of the new Romanian cinematography. Gatti was brilliant in the preludes of the Ist and IIIrd acts, where he also proved a certain respect for tradition.

No doubt there will be much talking about this performance. And only one regret, or maybe just a sudden irritation, the broadcast stopped before all the artists were applauded, and this was frustrating.

One more Sant’Ambrogio passed and Teatro alla Scala took a brave step towards modernity, without denying its great tradition, but tempering its exaggerations. And, as we were expecting, it took this step in great style and with panache.