Show Me the Money (II): Romania and the Money Squandered in Culture

A few weeks ago, I published an abstract of the British consultant Antony Feeny’s PhD thesis on the economics of opera theatres. Starting from the data and graphs in that article, I wondered what the situation looks like in Romania? Romania is a country that spends relatively little money on opera, and the public subventions are predominant. We spend a quarter of Austria’s expenditure, even if our population is  2.22 bigger and the GDP has nearly the same value (around 450 billion USD).

The budgets of the music institutions are almost completely covered by the subventions from the ministry. But let’s see more clearly what is the percentage of their own revenues for some Romanian music institutions and let’s compare this to the average sized opera theatres in the West. We will not talk about Covent Garden, Wiener Staatsoper or Opéra de Paris, and we will make the comparisions with the opera houses in Torino, Zürich, Stockholm etc. Nevertheless, it is worth mentioning that, in 2017, the three music institutions more or less directly managed by the interim manager of the Bucharest National Opera (which is Iasi Opera House and the Operetta and Musical Theatre) received a total subvention of nearly 22 mil. €, very comparable to the 25 mil. £ the Royal Opera House receives from the Arts Council. 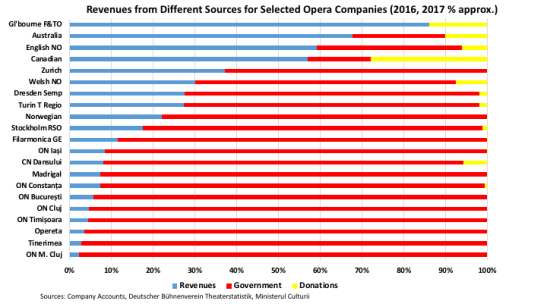 The red area of public subventions is the biggest one for the Romanian music institutions. The most social Opera in the Western Europe is in Stockholm, but even there, the revenues apart from public subventions are 17%, double the figure of Iasi (9%), or triple the one in Bucharest (6%). The Hungarian Opera in Cluj and the Operetta and Musical Theatre are at the lowest level of income from other sources, with 2% and 4%.

We can also notice the absence of any subvention for the Glyndebourne Festival. It is true, in the West, the festivals benefit of very little public money (10% at Orange or Verona). The Enescu Festival cannot exist as it is now without a public subvention of at least 30% of the total budget.

Two years ago, the cultural managers were complaining that their salaries are very small and the opera theatres are underfunded. In 2017, the salaries of the artists working in the institutions subordinated to the Ministry of Culture were doubled. The mediocrity of the artistic act remained the same. The managers adapted their speech immediately, and started complaining that now, because the salaries cut too much of the budgets, there is no more money for projects. But which is the reality? 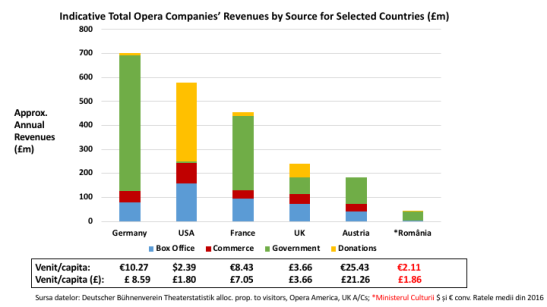 If I extracted from the graph above the percentage of other income (excluding subventions and donations) in the total budget for each country, I would have on average the following values: Germany – 18% , United States – 42%, France – 28%, Great Britain – 47%, Austria – 40%. Which means that, if BNO were an opera theatre functioning in one of these countries, then it should have its own revenues (from box office, rental services, etc.) between 2,5 mil. € (if it were in Germany, more than three times the 813 thousands € BNO produces in the Romanian reality), and 6,6 mil. € (if it were in Great Britain). Or 5.9 mil. € in the United States, 4 mil. € in France, 5.7 mil. € in Austria.  With this money, one can pay high quality guest singers, better productions, etc.

Still, everybody seems to be misled. The artists and the public agree that a generous sponsorship law would solve the situation. The politicians in power are even less realistic: they think that the biggest necessity is to build three more opera theatres, in Cluj, Iasi and Craiova (see the declarations of Liviu Dragnea, or Varujan Vosganian).

It is clear that the first thing to do by the government is to reform the Ministry of Culture. Because the real need is a legal framework that allows higher revenues apart from subventions. What is also needed is a real monitoring of the activity of these cultural managers, who hide too often behind the title of artistic director when they cannot utter a single sentence about their financial performances. And when they do not find money for projects.

With or without significant self-funding, it could be interesting to see how the budget of an opera house is spent. A music institution produces events. The following graph shows how much an event costs on average, by dividing the total budget to the numer of events (in brackets: the number of events in 2017 for each Opera). This is the roughest, but also the most authentic economic indicator. We calculated all the events in the calendar, from a simple concert to the premiere of an opera production.

The champions of spending are the Operetta and BNO. The case of the Operetta is eloquent: out of the 25 events they had in 2017, only six are operetta performances (they had only two titles), while nine performances are collages of songs put on a script and sold as musicals. Most of the events (ten) are galas and concerts. Therefore, when you go to a show at this institution (where a tenor is non-creatively braying near a piano in the foyer, like in „Seara de operetă și musical” ), please keep in mind that, beside the small price of the ticket, the people of this country have already paid nearly 170.000 € for this literary-artistic moment. These costs can be compared to those of a performance at the Welsh National Opera, the English National Opera, Sydney or Glyndebourne (around 200.000 €) and not very far from one in München or Vienna (around 300.000 €).  What more proof do you need for closing down this theatre?

We must add to all this an ensemble that renews itself with high difficulty, most of the voices being the same employees from the last 20 years.